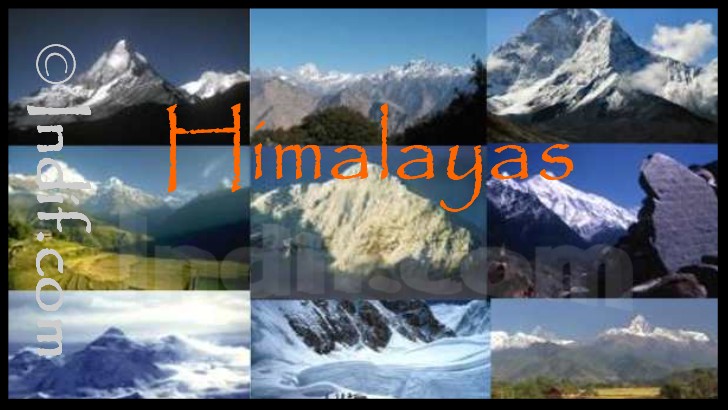 Himalayas in Sanskrit means ‘abode of snow,' which was coined by joining two Sanskrit words — ‘hima’ (snow) and ‘alaya’ (abode).

Some of the highest mountains in the world are located in northern India. These are part of the Himalaya mountains. Being the world's highest mountain chain, the Himalayas is characterized by its great height, complex geologic structure, snowcapped peaks, large valley glaciers, deep river gorges, and rich vegetation. They were given the name Himalaya which means "home of snow", because snow never melts on their high peaks.

The mountains also act as a climate barrier. They mark the transition from the humid, sub-tropical weather systems of India's plains and hills to the dry, arid desert climates of central Asia. They help contain India's weather and are instrumental in making it what it is. For instance, the northbound monsoon rains are forced to lose most of their moisture on the Indian side of the range, thereby leaving the northern Tibetian side relatively dry. The Himalayas themselves, despite their peaks being blanketed in snow, have a temperate Alpine climate and a lot of lush vegetation.

The Himalayas can be classified in a variety of ways. From south to north, the mountains can be grouped into four parallel, longitudinal mountain belts.

Pure heart is compared to the Himalayas, to the ocean of Milk, to a chariot for the Divine."
- Sri Sathya Sai Baba, an Indian Spiritual leader

Nobody climbs mountains for scientific reasons. Science is used to raise money for the expeditions, but you really climb for the hell of it.
- Sir Edmund Hillary.