Vedic astrology is an ancient science of astrology originated in India over 8000 years ago. It is called "Jyotish" in Hindi, which means "the knowledge or science of light." Since Vedic astrology or Jyotish is a part of Vedas (ancient Indian Hindu scripts), it is known as Vedic astrology. It is an analysis and forecasting system, based on astronomical data, that allows its practitioners to carefully assess and understand behavior, to measure the effects of the past, the influence of the present and the tendency of events to unfold in the future.

In Vedic Astrology, the palm is used as a support and cross-reference to the astrological chart. Unlike the Western concept, which separates the two, astrology and palmistry in India have gone "hand-in-hand from ancient times. From the palm the relative strength of the planets in the birth chart can be determined. It also helps in rectifying the horoscope if there is some doubt about the birth time. And it provides the astrologer with additional information about personality, life potentials, future trends, and events.

Jyotish is also a great healing system. In fact, it is probably the most fundamental of all healing systems, because it is based on a profound understanding of the root cause of suffering. In this respect, Jyotish does not focus on healing only the physical body. It treats all aspects of life. In the process it employs a wide range of techniques which, although unfamiliar to most westerners, are very effective. The healing methods employed by Jyotish are unique and varied. Based on the horoscope, for example, the Jyotishi (Vedic Astrologer) might recommend that the client wear a particular gemstone, chant a mantra, give money to a charity, or have a Yajna (fire ritual) performed in order to enhance the client's career, finances, relationships or physical health. These techniques are called upayas and have been passed down through an aural tradition over thousands of years.

The Zodiac is made up of 12 different sun signs. Your date of birth determines which one you are. 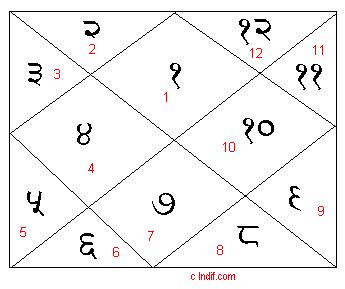 This chart is read in a counter-clockwise direction, beginning at the top middle triangle.

The first house or ascending sign or Lagna sign is always placed in the top diamond, labeled here as the First house (1).

If there is 5 in the first house it means Leo lagna.